Monkeys in The Cecropia Tree

Four species of monkeys live in Costa Rica, three of them popular as pets. The white-faced capuchin (called cara blanca in Spanish), the spider (called mono colorado or arana), the squirrel monkey (called the titi or ardilla) and the endangered howler (called congo). The word for monkey in Spanish is mono. Howlers are the least abundant in captivity, but the most abundant in Costa Rica. They eat fruit and leaves, as do the acrobatic spider monkeys, while the capuchins and squirrel monkeys enjoy a wider diet including everything from fruits to insects and lizards. 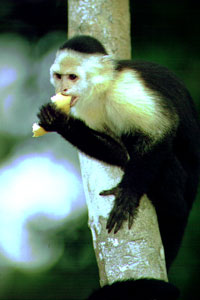 Here are some tropical fruits that white-faces, squirrel monkeys and spider monkeys eat in the wild that we do not often find in the grocery store. Click on the bullets for images.

Mamon’ chino, an exotic looking red, spiny fruit with succulent white flesh inside that you suck off a large seed

Maranon, the colorful cashew fruit or cashew apple, has the kidney shaped cashew nut inside. The fruit is bright scarlet and pear shaped with delectable soft, sharply flavored flesh.

Guava or guayaba is a thin skinned, lemon-like fruit rich in vitamins A, C, iron and calcium.

Mango or manga, the mango is the male fruit which is greener, smaller and harder than the female manga, which is more yellow with orange pulp.

Mombin or jocote is a dark green to red-skinned juicy fruit which has a spicy flavor. Its wild yellow-skinned cousin is called the hogplum.

Mountain apple or manzana de agua, has crisp white flesh and a pinkish skin, tastes similar to an apple.

Manzana rosa or the rose apple tastes like an apple but is rose perfumed.

Palm fruit or pejibaye is a small coconut that grows in a cluster among the fronds of the pejibaye palm tree.

Papaya or pawpaw has 45 varieties that grow in the tropics and this bland fruit may be yellow, green or orange-skinned.

Soursap or guanabana is a prickly kidney-shaped fruit which is a relative of the custard apple.

Starfruit or carambola has a pale yellow skin and very juicy white flesh.

Chiverre is a large green and white striped fruit which resembles a squash and is a member of the pumpkin family.

Bananas in many varieties grow in the tropics, including those which taste like apple, lemon or strawberry.

Although titi is a nickname for the Costa Rican squirrel monkey, it should not be confused with the real titi monkey which lives in South America. The squirrel is found only in the Costa Rican lowlands. At Manuel Antonio National Park, Grace Wong of the wildlife management program told Monkey Matters that she is studying the squirrels, which are a subspecies endemic to Costa Rica. Another subspecies farther south is endemic to both Costa Rica and Panama, though Grace says few remain in Panama.

In her research observations, Grace has identified 14 troops and has counted a total of 681 individual squirrels. Troop size varies from 15 to 65 members who range mainly in the Manuel Antonio National Park.

From May to October the fruit is abundant so foraging is easy and the squirrels have more time to play and rest. But by November, the sparse season arrives and they must spend most of their days looking for food. They rise at 5 AM and retire at about 6PM.

Young are born from the end of February to the end of March, with one birth per pregnancy. Females have young every two years, which is significantly less frequent than they are bred in captivity. Babies are carried for their first three months with other adults taking turns helping the mother. In Grace’s main study troop, there are four adult males, six adult females and the rest young.

During the scarce food season, there is some competition between the white-faced capuchin and the squirrels. When they clash, Grace says the smaller squirrel leaves. She has observed a capuchin grabbing a squirrel and throwing it to the ground. But when food is plentiful, tempers improve. Squirrel and capuchin eat peaceably together. In Manuel Antonio, natural enemies of the squirrel are mainly the boa constrictor and tyras (a mink-like animal).

Human activity in the park does not seem to drive the squirrels away; the increase in the size of tourism infrastructure in the surrounding areas has reduced the habitat of monkeys, in some cases destroying corridors in the forest which monkey troops use to move through it. This isolates the troops. Another impact of tourism is that monkeys near a tourist trail have people stopping to look at them. This seems harmless, but in times of food scarcity, the monkeys spend more energy on guard than on needed foraging.

A tropical storm destroyed about 60% of the canopy in the 90’s, reducing sites where monkeys look for insects and fruits, but regeneration has taken place.

When visiting Costa Rica, primates like the howler and capuchin monkeys are more apt to be spotted in a guarumo, or cecropia tree, than any other because of its open branch growth. Because it is a relatively short-lived tree (maybe 20 years), the cecropia, a member of the mulberry family, has not developed the chemical protection that some plant life has, such as toxic leaves.

Howlers in Costa Rica, where the cecropia tree grows throughout the country, eat its leaves and fruit.

On your summer vacation, provided that you either do not have a monkey, or that you have a close friend to monkey-sit, you may want to visit Cano Negro National Wildlife Refuge in North Central Costa Rica. Although the Cano Negro Lake is a centerpiece for resident and migrant birds, you may spend time on the riverboat (an arm of the river feeds the lake), where I spotted spider and howler monkeys. The boat runs from Los Chiles on the Rio Frio and is one way to enter the refuge. In a few magical hours, I spotted two troops of spider monkeys and three of howlers. White-faced capuchins also live at Cano Negro and all the monkeys there, as well as numerous other mammal species, are considered to be endangered. I brought a sleeping bag. Camping at the refuge is $2 per person and is the best way to get really close to the marvelous nature it offers. In the dry season, visitors can explore on foot, (you might get lucky and spot a monkey troop) or on rented horses. In the rainy season boat rental at $4 per person is necessary. Ask about the availability of a local guide to maximize your chances of monkey sightings.

At La Laguna del Lagarto Lodge, 93 miles north o San Jose, I spotted spider monkeys moving through tall treetops, sometimes with spectacular leaps and crashing sounds (the rattle and rustle of leafy boughs). I would swear I saw one slide down a long liana. Sitting on a bench across a small pond from them, I watched as they hung from their prehensile tails to feed on fruits in the surrounding tall forest. They fed amidst flock after flock of noisy parrots and parakeets, who flew in, stayed for a bit, and moved on. They watched the Jesus Christ lizards (so named because they can walk on water) skitter across the pond. This was all before breakfast! Owner Vincent Schmack has almost 250 acres of land in this striking forest and a neighboring forest extends the habitat of the white-faced capuchins, howlers and spiders. The howler monkey is the most vocal of the indigenous species and also considered the least intelligent. Ten miles of trail open the forest for exploration. A different habitat can be explored by canoe. Orchids and bromeliads (which capuchins have been known to eat in times when food was scarce) abound in this area.

Guests at La Laguna can stay at the 18 room lodge. Rates: a single is $63 and a double is $60 per person, including meals.

Another place I recommend is Rainbow Adventures Hideaway on the Golfo Dulce. During my stay I observed the white-faced, spider and howler monkeys in the 1200 acre private reserve. Hikes with a local guide include a two hour trek to a 50 foot waterfall or the in-depth customized jungle hikes where guests commonly spot their favorite monkeys among a wide variety of other mammals like kinkajou, agoutis, banded anteaters and coatis, to name a few. More than 100 species of birds share the treetops with the monkeys. It’s truly an incredible adventure.

Rates are $150 for a single cabin, $180 for two people in the lodge, second floor rooms are $130 for a single and $135 for the penthouse. Prices include meals, drinks and snacks, and a complementary jungle walk. Monkey lovers, call your travel agent!!

Another note for monkey lovers who might be thinking of relocating to Costa Rica: Buying a wild animal like a monkey as a pet is now forbidden in Costa Rica. Since the Wildlife Conservation Law of 1992 it has become illegal to keep captive wildlife there. Permits are required for special circumstances. This is one small step which has been taken to preserve native species, but a far greater toll has been taken by deforestation, commercial and other development . Banning wildlife as pets was simply the easiest (though least effective) target.   (By R Shenk)